In patients who have lost all their teeth, all oral implant prostheses should be of two types:

While removable dentures can be removed and inserted at any time, fixed dentures are placed in such a way that they never come out of your mouth.

Both solutions are superior to the old type of prosthesis, which is popularly known as the palate, and eliminates complaints such as inability to chew well and pain, and also prevents osteoporosis.

With the decision of the TDB Central Administrative Board, photographs of the patients before and after the treatment are not included. The pictures here are taken from academic publications taught at the university.

How to place all mouth prosthesis on the implants ?

“How to place their prosthesis on the implant of patients who have lost all their teeth is also among the frequently asked questions. 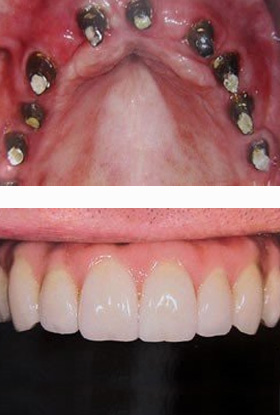 All oral prostheses are placed on implants in two ways. First, six to eight implants are placed, and the entire mouth is fixed on these implants, just like the teeth are fixed, and the patient uses it without removing it The second is a system that is dispersed throughout the mouth and placed on the implants with a movable system, which we call the snap style, with a system. The patient can wear and remove these prostheses whenever he wants. In this way, it is also possible to use prostheses that compensate for the melting parts of the jaw bones.”

Dynamic prosthesis on the implant

In the second, the implants are attached to the holders in the prosthesis separately. These two types of prostheses provide more support and are stable during chewing than the traditional implant-free removable prosthesis.

These prostheses are generally applied to patients with a lot of bone loss. Compensating for the lost bone with acrylic, which is lighter than porcelain, is safer both aesthetically and in terms of less load on the implants. .In addition, since this prosthesis can be put on and removed, it is easier to clean and oral hygiene is better.

Stable prosthesis on the implant

At least four implants are required for fixed prostheses on implants. These prostheses are generally divided into two.

The first is that the prostheses made on four implants, which we call "all on four", are fixed, making it easier to chew than removable prostheses, while maintaining oral hygiene is more difficult. In this treatment protocol, no bone graft is applied to the patient, and the patient starts using prostheses after the implants are placed in the areas where the bone is good and the implants fuse with the bone. The biggest disadvantage is that since the number of implants is small, if an implant is lost in the future, the patient cannot use the prosthesis again and the prosthesis must be renewed after the implant is rebuilt.

Another type of fixed prosthesis is the over-implant bridge prosthesis made on six or eight implants. In this form of prosthesis, the patient leaves the clinic with a temporary tooth and continues his social life, since the number of implants is high on the day the implants are placed on the patient. The only disadvantage of this form of prosthesis is that if the bone support is not sufficient, the cost and waiting time may be long since bone grafting will be applied. However, since the patient will have temporary teeth during the waiting period, he will not feel toothless. The biggest advantage is that even if an implant is lost in the future, that implant is removed and the patient continues his life without changing the prosthesis. Thus, there is no extra cost and time loss.